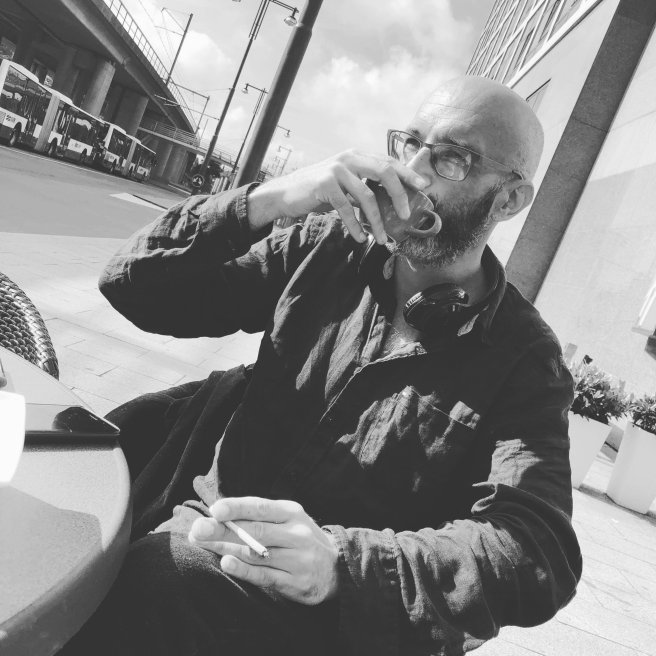 He ran in his dreams.

There was the recollection of his uncoiled youth. Slim and taut with muscle, even at twelve. It taints his memories of his youth with crude washes of horror and regret.

These dreams woke him, trembling and confused. It was a long time ago, and yet these dreams returned like a recurring complaint. He was a man who could have someone killed with a phone call, but in his dreams, he ran from the train with the snap of bullets passing by him.

He got up, poured himself a good measure of single malt, lit a cigarette and walked to the living room.

Benny stood up when he walked in, his mouth twisted into a knot of concern but Ernest waved him off. Despite wearing nothing but a robe, Benny responded to him like he were in an expensive suit, but Ernest sat down and looked at his employee with something close to need.

‘Do you ever have bad dreams, Benny?’ he said.

His voice was a thin, reedy whisper but Benny furrowed his brow and considered the question with great importance. He shook his head and emitted a small squeak of a no.

Ernest chuckled and took a sip of the whisky. He sat back and drew on the cigarette.

‘Is everything ok, Mr Wolfowitz?’

Ernest let his head tilt backwards as he blew out a plume of smoke.

‘I guess. You can sit down, Benny. I’m worried you can see my junk from there.’

Benny sat down fast enough to make the cushions jump and Ernest sat up to look across at him. He ran his tongue across his lips, left to right, before he let it settle in the right corner of his mouth. His eyelids were low as he took another pull on the cigarette before settling into the couch.

‘Thanks for not saying either way. I make you nervous, huh?’ he said.

Benny nodded and flicked a nervous smile. His moustache was sweating as he looked at his boss.

‘Just this is the first time I’ve sat across from you. You said, if I see you, it means something’s gone wrong.’ he said.

Ernest recalled saying it, and a small burst of regret singed his insides.

‘I meant, I need no interruptions, Benny. I’m not an asshole to you guys.’ he said.

Ernest set the tumbler down on the floor by his feet as he adjusted his robe.

Benny had never served, but he nodded in agreement again and say thank you. His reaction pleased Ernest, who picked up the tumbler again and took another appreciative sip. Its warm burn relaxed him as he blinked and chased it down with a puff on the cigarette.

‘I have this dream, Benny. The same dream, over and over.’

You know the worst thing?

How ordinary those men were. You think of them as monsters but it is too easy, gives you an out if you ever wonder about your own capacity for evil, Benny, I tell you. A unit of volunteers, police in their own country, but they volunteered to come and do their duty.

They came to the village at night. Pulled from our houses like vermin, gathered together in the square as they watched us, made sure we didn’t run away. My father had died last year, so I was the only man left in my family.

There was nothing I could do. Nothing at all. Twelve years old, and looking at those men, barbers and engineers at home but here. Gathering us up to take a train.

. They kept the men together, and packed us in so tight, Such a thing, I couldn’t breathe, but I was thin and so I moved to the sides, pressed to find any cool, clean air to breathe in. Each breath stunk of other people, all of us, soiled and doomed.

Such a thing to smell, Benny, I tell you.

Escape? No, such a thing was a dream and I was very much awake.

But I didn’t stop looking. They were not smart men, who put us in these carriages. Some of them smelled of too much beer and looked at us like they expected us to tell them what to do. One of them was slack on securing the door. I watched him do it.

But I remembered, Benny, and when we got to the train yards, it would pass the woods outside my village.

The woods were my favourite place to play, I knew them well.

My hands shook as the train slowed down, ready to take on more passengers. My heart was in my throat but I made myself push the door open. The night air fell on me like a cool wave, and I cried out with a savage joy. There was a rough hand at my back then I was tumbling forwards, landing in the dirt hard enough to knock the air from my lungs.

I got to my feet, heard the shouts go up and then the guns firing at me.

Have you ever ran like your life depended on it?

It is not an easy thing to do. Part of you wants the defeat, like a wound which can never heal and it gives you a reason to be clumsy, Benny, but fight it when it comes.

They were not good shots. It was not a matter of pride for them, to be competent soldiers. It was to my fortune they missed me.

Others behind me, were not so lucky, but they died free.

The worst thing is, I don’t dream about my mother or my sisters. My father had been dead for three years by then. None of those things bother me, Benny, but do you know what does?

In my dreams, Benny, I dream about them shooting me. Or worse, catching me and putting me onto the train again. What sort of man thinks about those things?

What sort of man dreams about the bullet which never found you?

Benny fought back tears as he coughed into his hand before he looked up at his boss.

‘We all have times when we think about how things could have gone down, Mr Wolfowitz.’ he said.

Ernest tilted his head to one side, curious despite his exhaustion.

‘But I didn’t get shot, Benny. I made it, and then from there to all of this.’ he said.

There was no need for a gesture, Benny knew. If you worked for Mr Wolf, you knew what he did to keep what was his and added to it with the same fervour. If James Brown was the hardest working man in show business, then Ernest Wolfowitz was the hardest working man in crime. One of the wealthiest too, and he had moved a lot of dirty cash in clean, legitimate vehicles but if you bought a dime bag, Mr Wolf made money from it.

‘I know, but we still think about it. If it makes you feel fortunate, then it’s God talking to you.’

Ernest frowned and picked up his glass.

‘He does not talk Benny. Not since he packed my family into the trains.’

Benny sat back, remembering how his girlfriend had told him to stay off religion or politics in polite conversation with anyone you didn’t want to piss off. He folded his hands and put them into his lap.

‘Sometimes he doesn’t say nice things, but he tells you the truth.’ he said.

Ernest watched him before he drained the rest of the glass and stubbed out the cigarette in the ashtray. He got up, adjusted himself inside his robe and walked away without speaking. Benny stood up as he left, but Ernest did not acknowledge the gesture. Benny waited until he heard the click of the bedroom door before he sat down.

He wondered how much trouble he was in until dawn when the next guy came in to take over and he drove back to his apartment. When the phone rang, he heard Yanni, one of Mr Wolf’s lieutenants, tell him a car was outside.

Benny ran to the bathroom and vomited before rinsing his mouth out with water and throwing on a jacket as he ran downstairs.

Someone set a chess board up in the study. Mr Wolf sat with a crystal decanter of scotch and a welcoming smile which unnerved Benny as he looked at the empty chair opposite him.

Benny sat down and looked at Mr Wolf.

This, Benny knew, was Mr Wolf. The old man last night, he wasn’t someone to mess with, but this man before him, although he wore the same face, held himself apart from everyone and everything.

Mr Wolf poured Benny a drink and handed it to him.

‘No, Benny, I thought it useful to talk about God with someone I trust not to tell anyone.’ he said.

Benny went to say like a confession but remembered his girlfriend’s advice and bit down on his tongue. The scotch stung him, but he kept his impulse under control.

It was the start of a great friendship. They held one another’s confidence for five years before a stroke took out Mr Wolf and left him bedridden. Benny took half a million from the Garcia Cartel to hold a pillow to his friend’s face, but as he felt him relax. Benny was glad at the end, it was down to him. Tears ran down his face as he leaned over and whispered into Ernest’s ear.

‘The bullet found you.’ he said.

Benny recognised himself in the ordinary men who shoved Ernest’s family into the streets, and it had killed his own faith. As Ernest died, part of Benny died with him. The rest of it followed a week later when the Garcia Cartel decided Benny was too expensive to keep around.

It was on a train out of the city, Benny had sat in first class, which made him easy to find. When the three men, not much more than boys, closed the doors behind them, Benny smiled. They were competent, and they promised to be quick.

His bullet had found him, too.

He looked forward to telling Ernest about it.

My book Until She Sings is out now.