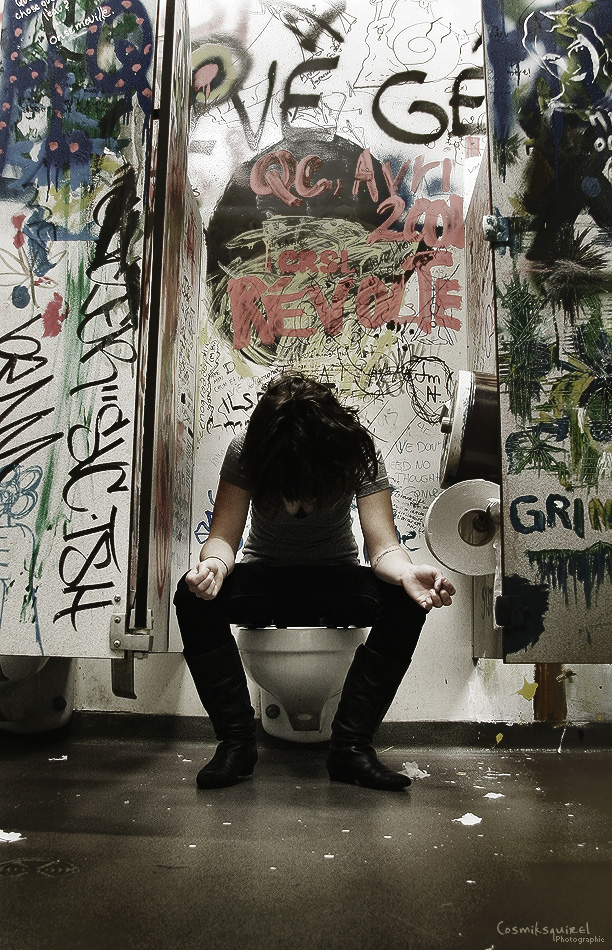 Corrine’s day started as a low grade headache as she looked out at the window and saw the flurries of snow  She massaged her temples and swallowed. Her tongue was thick as she scraped the edge of her front teeth over it.
Corrine looked at the bruising under her eyes from too little sleep or too much dreaming, she couldn’t tell anymore. Her hair was in clumps and locks from where she had tossed through the night. Weeks of bad dreams, words crawling to her as she sat on the toilet, paralysed and clutching her head.

She heard her grandfather call her name and she called back, saying she was in the bathroom. The dreams had been awful, loud and discordant, recalled in pieces which returned to her as she tried to make the most of the snow day. No college but also no distractions from her exhaustion and unrest.

‘No college today, then? Just you getting under my feet, girl.’ he said.

He smiled at her as he pointed towards the kettle and asked if she wanted a cup of tea. She rubbed her eyes and nodded and he got a second cup from the cupboard. He opened the tin which sat on the side and muttered under his breath.

‘Out of tea bags, girl. Want to pop out and get some? Loaf of bread too, I fancy some toast’ he said.

Corrine ran her tongue over her lips as her head throbbed with pressure.

She bundled on a thick coat, gloves which looked like someone had skinned a care bear but kept out the cold, and jammed on a hat before she went outside. The snow had fallen in drifts and she shoved her hands into her pockets as she made a cautious pace down the road.

The pavements were slick, burnished from where children had been skidding across them, and she remembered reading how innocence was still children pulling the wings from flies. Joe Hill’s NOS4R2, which she’d picked up from the library. It was a book which spoke to the malevolence of winter, and standing still in one place, unable to recognise the damage we do to ourselves. She had loved the book but found too much of herself in the main character to read it again. She didn’t have to, she told herself.

She got tea bags and a loaf of bread, relieved she hadn’t slipped over as she walked back as another flurry of snow flew in her face and she squinted against it.

The blue Astra belonged to a neighbour. Corrine had walked past it, grinned with irony at the ‘powered by fairy dust’ decal on the back but there was something different today. Where the snow had gathered on the bonnet, someone had written a message.

Corrine stared at it, looking around her to see if anyone was watching. The randomness of it disturbed her and she walked away from it, grimacing as she tongued the roof of her mouth and recoiled at the taste of sour dreams.

When she got to the house, she saw the front door was open and she ran inside, calling her grandfather’s name and dumping the carrier bag as her heart pounded with alarm.

Corrine heard the clashing sounds from the kitchen. A grunt of concern made her charge forwards, driven by a violent panic as she pushed open the door.

Her grandfather had a deep cut on his right cheek, deep enough to show his teeth through the gap as blood voided down his neck but his eyes were bright with determination as he stared into the face of his attacker.

It had his back to her, showing the insectoid plates of armour which moved and flexed as it struggled with her grandfather. It turned and hissed at her, revealing sharp, uneven teeth protruding from a lipless mouth as its nostrils flared with disgust.

Corrine saw the curved nails on its fingers as it sought to overpower her grandfather and her mouth flooded with thick bile and she tasted the bitterness of her nightmare. The sunlight streamed in through the window, and she recalled one image from her nightmare form before her eyes.

It eased the pressure in her head to look at it. She breathed and stared into it, working on a sense of right action, like the first breath after a long time holding it in.

The creature wrestling with her grandfather shuddered as it lifted its chin and screeched as blood streamed from its eyes. It let go of her grandfather and he staggered backwards, reaching behind him for the knife as he squatted into a horse stance and stabbed it upwards into the creature’s belly. It sagged forwards and vomited blood onto the lino before it looked up at Corrine, all feeling gone bar a blind malevolence before its head ripped apart, like wet tissue pulled between two strong hands.

Corrine stood there and watched her grandfather reach down and pull the knife from its stomach. He wiped it on the sleeve of his cardigan and she watched as he poked his tongue through the slit in his cheek. There was a terrible clarity in the aftermath of what she had done.

He walked over to her.

‘Snow days are different. The world we know, it becomes somewhere else. I never thought they’d find us, girl, but they have and we need to get out of here.’ she said.

Corrine stammered as she pointed at the body on the floor.

Her grandfather looked down and kicked it as he sneered, opening the wound in his cheek before he hissed and picked up a towel and pressed it to his cheek.

‘A shadow thief. Their souls were extracted and they were altered to hunt you down. If one has found us, they’ll send what they have available.’

Corrine stepped past the body and put her arms out as her grandfather held her with one arm around her as he held the sodden towel to his cheek.

‘None of it makes any sense. I don’t have creatures coming after me.’

He sighed and squeezed her close to him. She felt him grunt with pain and looked up at him.

He nodded and closed her eyes

‘Your father called you his little princess? There was a measure of truth in it, which was why I chastised him for it.’ he said.

She told him about the shape she had seen and he breathed out a sigh of relief.

‘You’ve come into your gifts. Look for signs which form shapes, they are sources of power.’

He patted her on the shoulder and said they needed to get moving.

‘Where are we going to go?’ she said.

He pulled the towel from his cheek.

‘Stitch this up then run.’ he said.

Corrine shivered as she pulled the hat from her head and struggled with how much sense it made. The restlessness, graffiti crawling along the walls

‘There’ll be more of them?’ she said.

He nodded as he glanced upstairs.

‘We need to pack and get moving. I’ll clean this up.’ he said.

She looked down and grimaced.

Her grandfather grunted and bent down over the body.

She ran upstairs and grabbed a rucksack, stuffing clothes in without a thought beyond the crawling horror of the moment before she heard the crash of a broken window and spun around as a shadow thief crouched in the doorway and hissed at her.

Corrine felt another image come to her and she sent it into the creature’s stomach like a zen, invisible bullet which made it fall backwards as she grabbed her rucksack and ran downstairs, legs hollow with panic. Everything had gained speed and each moment flashed before her as she shouldered the rucksack and called her grandfather’s name.

He clutched his stomach as the man stood there, too wide and tall as he sheathed the short sword on his hip with one hand as he pulled the helmet from his head. His long blonde hair was matted to his scalp and his skin was mottled with exhaustion despite it being the dark green of chlorophyll as he smiled at her.

‘Your highness.’ he said.

She looked into her grandfather’s face as he stared at her and a symbol pushed into him. He opened to her and she learned about herself.

Once upon a time, there were two families who fought over the kingdom. They were both much alike in dignity, but blessed with gifts which gave rise to amusing and horrible events. This war receded into the past until a young prince offered the olive branch and the other family, more interested in exploring their powers, focused through images and movements into producing particular effects. The hope of peace had spoken to their new focus on the spiritual.

It was their downfall and at dinner, they were slaughtered apart from one prince, his pregnant wife and their bodyguard. They slipped from one world to another. Somewhere without the florid powers where they could hide and raise their child.

Her parents were pragmatic and adaptive people. The borrowed memories spoke to a heroism which she would honour by surviving. Her grandfather was not hers by blood, but by choice and it did not diminish his love for her.

There were nuggets of knowledge amongst the history. Movements as an expression of magic and her limbs flowed with power as her body moved into position, ready to defend herself.

His name was Yifbam Tow Diglax, a cousin from the other family, interested in the chance to hurt others and persistent. The name and pronunciation came to her lips and she spoke to him in their native tongue.

‘You should have left me alone.’ she said.

This second was too fragile to contain her feelings. Survival mattered as the armoured man came towards her. Corrine felt through the movement and read his intentions before he reached her..

He wanted to take her alive. It was his mistake as she turned her hip around and brought her right arm under his and helped him to the ground, using his momentum against him as he crashed against the floor. He gave a deep moan through a broken nose and jaw, as he spat teeth to his side. She leapt on top of him and pulled the short sword out and jabbed it into the back of his head.

She slipped the belt from around his waist and buckled it up as she put the sword back and shouldered her rucksack. Her grandfather rolled onto his back and reached for her. She came over and kneeled by him.

He stroked the hair from her face and gazed at her with a luminous, gentle love.

‘You saw the words in your dreams and felt the distance from who you are. You must follow it through, girl. There are friends here, but you have to find them.’ he said.

She kissed him and he squeezed her in his arms before he exhaled through his teeth and told her to go. Corrine sobbed as she got to her feet and looked at him, bloodied but regal as he pressed his hands against the wound in his stomach and laid down, his watch ending with her alive and aware of herself when she needed to.

She ran out of the back and through the gate, there were fields ahead, blanketed by snow and she felt dizziness before the next breath she took reminded her of the will to live. Corrine knew wherever she slept tonight, it would be peaceful and powerful enough to keep out the cold.