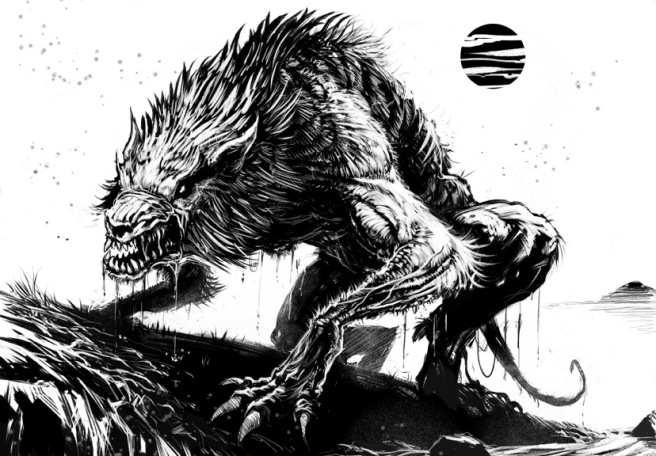 John set the link on his watch to alert him for any changes in her condition. The coma had arrested the worst of the damage and generated a cocoon of scabs. Her vital signs were stable and it was a matter of maintaining sterile conditions and a constant supply of nutrients whilst she went through the process.

He walked out of the facility and up the stairs, went to the kitchen and made himself a cup of coffee and found a pack of cigarettes in the drawer, stood on the patio as he smoked and looked out into the night.

He showered, forced himself to grill a steak and eat it before his dedication drew him back downstairs.

John had rigged speakers into the walls. He liked to have music whilst he worked, loud and harsh music to focus him on his work.

‘We know it insinuates itself into the brain stem and it rewrites a lot of it. We don’t know why because it hasn’t reproduced before now.’ it said.

He scratched his chin as he watched her.

‘I must have passed it to her. It hasn’t shown up anywhere before, but she’s got it.’

‘ It doesn’t seek to spread itself which is not the profile of a disease as we know it.’

John unrolled the keyboard and logged into his computer.

He brought up the data from the encephalogram, rendered in three dimensions and he turned it through several angles, studying the details for a sign of its intentions.

‘It chooses the host. Whatever criteria there is, it’s worth looking at. What’s your take on her?’

The A.I. opened a window on John’s screen.

‘She’s maintaining baseline function. There are spikes of electrical activity but they are cyclical. Kelly is down there in the dark somewhere.’

‘There was nothing for us.’ he said.

‘We can’t study ourselves John. I’m not even you anymore. You’ve had experiences I won’t again, even though I could reproduce them.’

John looked around the room.

‘You’re free to help me without the fear of losing control.’ he said.

‘I think it’s heal thyself, but what do I know?’ John said.

John raised his middle finger in the air.

He watched Kelly’s neural activity, the waves of her ocean as they rose and fell. He wondered what lived in her depths and hoped she would return to show him.

The Editor opened her eyes as the contact lenses bloomed with information. The linguistic suit felt like silk against her skin as she crouched in the attic. She closed her eyes and searched out the streams of information. Phones humming with data, kids in the bedrooms staring at phones and security guards with wireless earpieces and she saw them all as vibrating streams of information. It had been six hours since she stepped through the shadows, following the follow of things into the attic of the house. She had brought a flask of tea and meditated until she felt the change in temperature and activated the suit.

The suit allowed for intangibility or invisibility but not both at the same time. Something to do with the root words clashing so she had to choose her actions with care. She saw the hallway was clear and formed the word in her mind as she drifted through the floor, slipping between the molecules as she emerged in the hallway and then shifted to invisibility. The lenses collected light which allowed her to see. She reached for the harness under her jacket and retrieved an oval shape of translucent jelly and placed it on the wall before she whispered its name and walked to the bedroom.

It was of no consequence what this man had done. She never questioned the wisdom of The Cradle and she acted without pause or doubt It was not fanaticism, but she had seen things and the necessity for a robust defence against them. The family were here, but she had the skills and words to render them irrelevant.

She formed the word and became intangible, slipping through the closed door and stood in the master bedroom. It was ugly enough to make her grimace, too much gold for anyone and large photographs of the man and his family. They had the same rictus grins, shark eyes and rehearsed ease as a lot of the people she had to edit.

The couple were asleep. His wife laid on her side, with an ermine lined sleep mask and the slack features of someone who needed pills to switch off. He laid on his back, round and hard belly lifting the covers as he snored in rapacious, sharp blasts and smacked his lips. She walked around the bed and stood at his side. She moved her eyes and watched the keyboard appear before her fingers as she opened the relevant file.

A story, written from the perspective of a depressed, sentient artery which ruptured after decades of poor diet, stimulant abuse and an appalling overload of self awareness. She winced at the copy but sent it, promising she would send her feedback at the next transmission window.

She sent the keyboard away with a wave of her hand and watched him convulse and then give a last gasp of breath before she left the room. She slipped through the closed door and formed the invisibility word.

The guard walked past the oval charge on the wall and crumpled to the floor. She walked past him before transferring to the intangible word and walking out the front door. Her thoughts raced ahead of her, thinking how she needed to finish watching the rest of the debate on biblical iconography and mythology. It fascinated her how close this world was to the truth and yet so far.

She walked past overwrought sculptures, saddened there was nowhere for the children to play. She observed the house and grounds were more like a museum than anything resembling a home.

Now, she told herself; it was a tomb. An ending she would accept if it crossed her desk. She found a trail of shadow snaking around the rear of the house and stepped into it, crossing the distance until she was back in her bedroom. She visualised the removal of the suit, visualising each word fading into nothing before she went into the bathroom and removed the lenses, decanting them into the black solution before she rinsed her eyes with water and saw him stood in the doorway.

He came forward and took her in his arms.

‘Want me to read you a story?’

She nodded as he walked her into the bedroom.

He read the velveteen rabbit to her and she fell asleep on his chest before he finished reading to her.In her dreams she visited with the Cradle. Her editor-in-chief Robert was retiring at the end of the term and she hoped for a move into the faculty.

She smelled the faint sweetness of sandalwood and the gleam of hair oil, how real it carried into her unconscious.

‘Excellent work. Now, I have to put you onto an immediate revision.’

Her first reaction was shock. The operation depended on her keeping a limited operational profile and to go out into field work on a constant rotation invited scrutiny which compromised her cover.

His too, she thought.

He ran his index finger in the air before him as a keyboard shimmered. Sparks of blue and red flew up as he typed with grim concentration before he sat back and waved it away.

‘I’ve sent you the details. Now you will need six solid hours of REM sleep and we’ve arranged for a Golem at the other end.’

She narrowed her eyes and Robert sat up in his chair.

‘We are not taking risks on this anacrusis.’ she said.

They had made plans for the weekend. He had started a new job and they weren’t seeing much of each other. He would call in the evenings whilst she sat composing custom phrases which imitated the effects of damaged wiring or leaking pipes and sent them to a cloud-based database. An arsenal of words which she used to enforce the will of the Cradle.

Dichotomies fascinated her, but she found this one unpalatable.

The Editor would need a cover story. She thanked Robert and returned to a cold, bleak five a.m. Her phone hummed with a notification but she turned into his arms and stroked his cheek. His eyes opened and he smiled at her.

She kissed him on the lips and pushed herself into his arms, held him tight as she rested her mouth against his neck and closed her eyes.

The Editor decided it wasn’t too much to ask for another hot water bottle. It would give her time to tell him she was going away again.

Her mother stood in the kitchen, swaying as she poured herself a tumbler of scotch as Kelly stood in the doorway. She had been twelve years old, the certificate for computer science in her bag but left there when she saw the glazed look in her mother’s eyes.

Kelly forced a smile onto her face.

‘I won a certificate in computer science. Want to see it?’

Her mother gave a lopsided grin and raised her glass to her daughter. The gesture was loose enough to cause some to spill onto the back of her hand as she shook her head.

‘Let momma ease into her day a little?’

Kelly smiled and fought the tight bubble of acid in her stomach before she went to her room and shut the door. The drinking had spread through her life like mould and it was all she could see before her.

‘How am I here? This happened.’ she said.

She looked at herself as an adult. There was a knock at the door and she got up.

Her mother opened the door as she poked her head around and looked at her daughter with slack suspicion.

‘Did I do something wrong?’

Kelly grimaced as she recalled the sting of her mother’s words again.

‘How is this happening? Am I dead?’

Her mother lurched into the room, taller than Kelly with elongated forearms as her acromegalic jaw hung open and her eyes glittered like black pearls as her hair hung in her face, thick and lank.

‘Because I don’t drink because it’s fun. It’s tough for me without your dad around.’

Kelly backed against the wall of her bedroom. Her mother’s voice boomed and pushed the air around the room loud enough to make her eardrums ache. She folded her forearms over her face before she took a deep breath and told herself it was a fever dream.

She lowered her arms and saw her mother returned to normal dimensions.

‘Kelly, I’m sorry to use this way to talk to you.’ she said.

Kelly stared at her and scowled.

‘This isn’t funny. This is just my brain responding to whatever I’m sick with.’

Her mother shook her head.

‘You’re right but you’re in a position to listen Kelly. John can’t talk but you can.’

Kelly fought tears as she saw her mother, benign and wise as she had not been in life. She had done her best, but the drinking wore the good parts away. If this was all the side effects of her brain boiling in her skull, then it was worth going along with. Her mother asked her to come through to the kitchen. Kelly nodded and followed her out of the bedroom.

2 thoughts on “The Transformation Episode 23 – A Terrible Anacrusis”