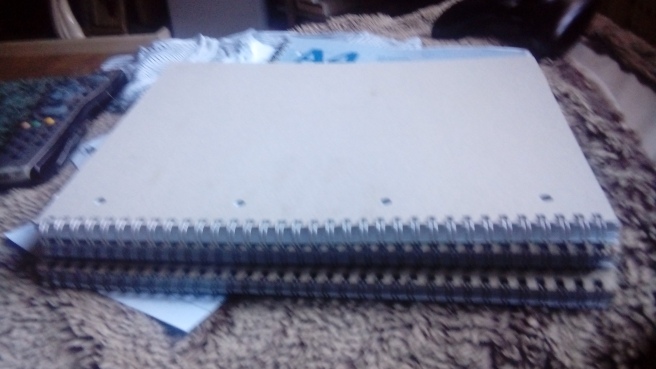 The above picture is the completed exploratory draft of Lawful Evil. I finished it on Saturday in a mammoth writing sprint. Whenever I finish a draft, it’s a bittersweet experience, a mix of relief and regret. A lot happened during the three months of writing it, and the work reflects that. It’s the first book where I worked from a story grid, so it has more of a structure from the first. Now, it goes away for a couple of months, I’ve set a reminder to dig it out then and start transcribing it from longhand to the computer. During that time, I am editing as I go, making sure that the themes and ideas ring true, fill in any gaps and generally polish it up until it shines. I will be looking for beta readers after that, and sending it to the agent for further notes and feedback.

She’s Here is going really well, in the editing stages where I am looking at things like sticky sentences and overused words rather than the story itself. It’s an education and I always feel like I develop my craft when looking at my own flaws and correcting them. You will, of course, make new mistakes but they’re only tragedies if you fail to learn from them.

After that, I will be starting something entirely new again. The projects will require a little bit of research, but that’s a pleasure in and of itself. I am always writing, or thinking about it, and there’s nothing that stops me. It’s a great relief that I have this purpose, it keeps me upright when the world wants to kick me in the stomach.

I finished a couple of books at the weekend. Robin Wasserman’s Girls On Fire which was stunning, reminded me a little of Megan Abbot’s writing, but had it’s own sense of urgency and passion. It does not spare you, in it’s telling and I was genuinely moved and invigorated by the books.

I also read Eileen by Ottessa Moshfegh, which was a noir novel that reminded me of Patricia Highsmith. It had some compelling moments but the elements that have perhaps been its selling point ultimately became it’s downfall. It takes too long for the big reveal to occur and when it does, the ending afterwards becomes too abrupt. It is beautifully written, the narrator/protagonist has a strong and well realised set of flaws, and there is a willingness to acknowledge the flesh in the book.

I am now reading A Wake of Vultures by Lila Bowen, which is very enjoyable, essentially it’s Buffy In The Wild West but it works really well in terms of worldbuilding, letting the western elements breathe and it’s quite interesting how the two genres work together. I’ve got the sequel as well, so will be reading that.

Books and writing get me through. My passion and purpose remain unabated.

Thank you for reading.